“Altoids are one of the oldest breath mints and are still made from the same formula that dates back to the reign of England’s King George”.

Unfortunately this is no long true as the formula was changed in April this year when they substituted ‘corn syrup’ with ‘glucose syrup’ and ‘artificial flavor’…and as a result they don’t taste quite the same, at least to us seasoned Altoids customers. Here’s our latest post.

I’m sure they have their reasons for making this change, just as Coca-Cola did at the end of the 1980’s when they took the original Coke off the market and launch ‘New Coke’….which fortunately only lasted for six months before they returned to the original ‘7X’ formula of classic Coke…after a public outcry and lost sales which resulted in Pepsi becoming the No.1 Cola drink in the US for the first time in over 100 years.

Hmmm!!! If King George were to come back to life he would “off with their heads” for committing such a travesty to a wonderfully traditional product such as Altoids…and we’d all say “here! here! long live the King” for peppermint Altoids will surely be dead within a generation, now that they can’t claim the heritage of being made to the same formula for all these years.

This brief update was provided to us by Anthony Bourdain and we greatly appreciate him keeping us abreast of the never ending changes in the candy industry!! 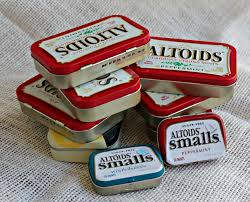